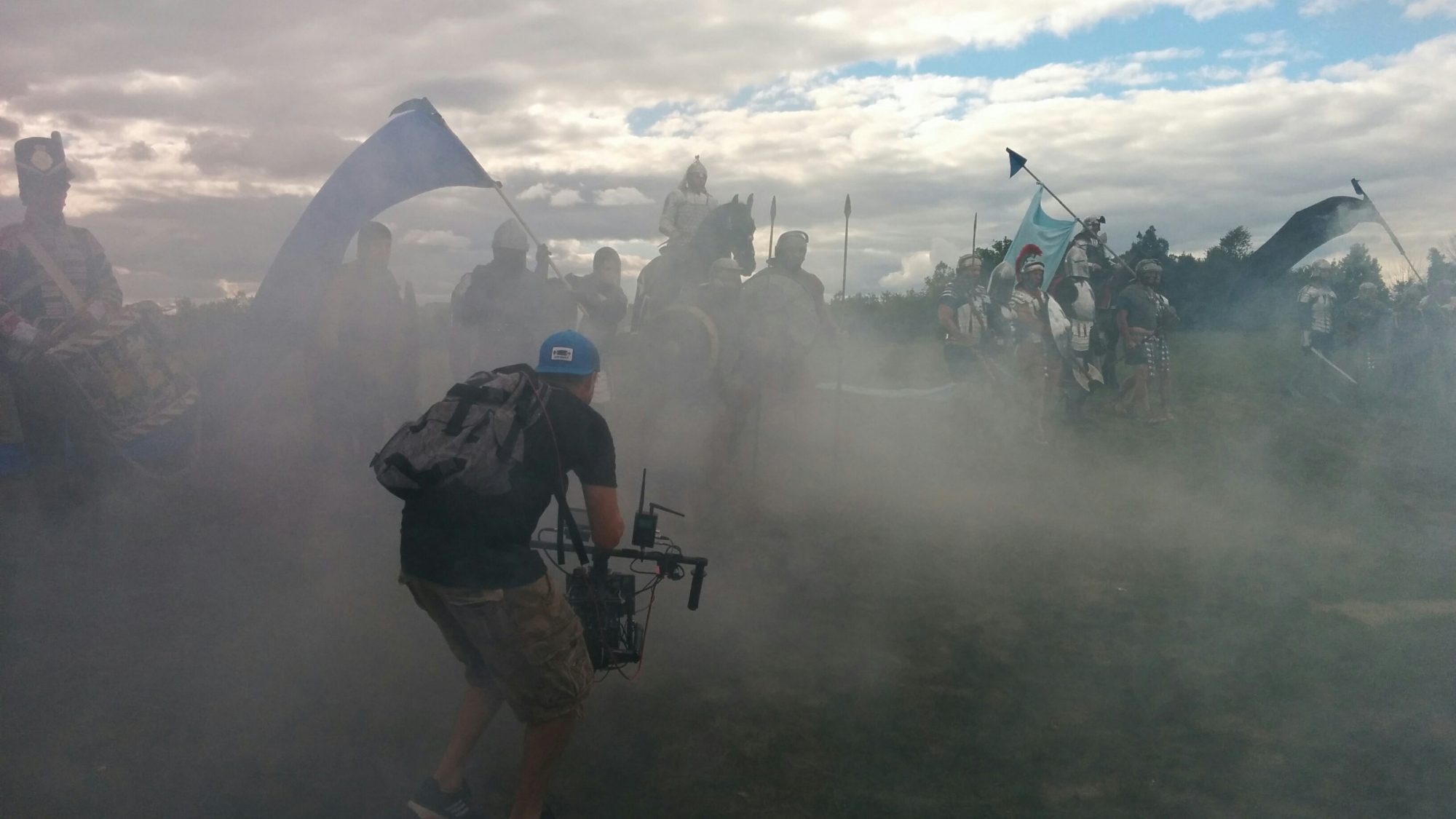 Director Mark Zibert remembers the exact moment the storyboard for a new project for the Hospital for Sick Children in Toronto arrived at the Skin & Bones office last spring.

Zibert, who had worked for the hospital in the past, shooting the “Better Tomorrows” campaign for JWT and a print campaign before that, was immediately interested in the concept. The goal was to grab the attention of potential donors with vivid metaphorical portrayals of the battles against illness and disease being fought at the hospital every day, using real child patients of the hospital, their families and hospital staff. Creative agency Cossette had dubbed the campaign “Vs.” and imagined the title in bright neon light—which was the first thing Zibert noticed. “The word Vs. was instantly something that intrigued me,” he said. “The whole concept of sick kids versus… all the challenges that the hospital faces and the kids face.”

A little more than a year later, the two-minute anthemic spot “Undeniable” just won three Cannes Lions (as part of a campaign that won eight Lions in all) after picking up hardware at The One Show and D&AD.

We caught up with Zibert the week before Cannes (he was staying home to be with the family), to get the story behind “Undeniable” and to understand how he took the idea from a cool concept on a storyboard to a polished, world-class, multi-award winning piece of advertising.

The first step for Zibert was creating a more clearly defined story arc for the spot. “When we first saw the board, there was a lot of cool imagery, and it was inherently bad-ass. What we all figured out together was that it couldn’t just be bad-ass for the sake of being bad-ass. We came up with more depth and the notion of the alter egos,” he said. “We needed to figure out how to take the viewer from A to B in an interesting way that builds and isn’t just crazy and weird for the viewer. There’s actually an emotional journey that you are taken on.”

Once they had crafted a more defined conceptual narrative for the spot, Zibert and Cossette creative directors Jaimes Zentil and Craig McIntosh set up a “war room” at the Skin & Bones offices to figure out how to go from concept to execution.

“We had hundreds of photos, references and locations,” said Zibert. “It was a mosaic, 360-degrees around the room. There were pictures of talent we wanted to feature, potential wardrobe options, where we would shoot, film and light references. Just any visual references, and it really helped us build the scene.” The three of them talked through everything, sharing ideas with chief creative officers Peter Ignazi and Carlos Moreno who’d respond with their own suggestions. And as they kept talking, the ideas grew and shifted and changed. 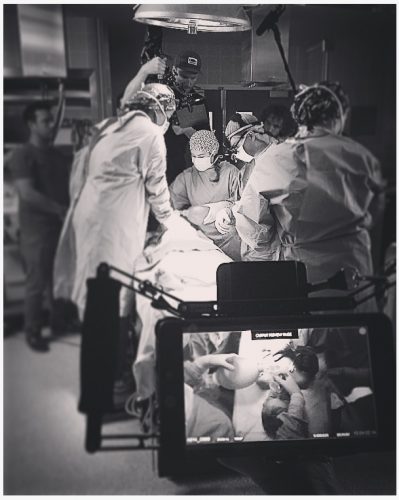 “At one point, we were talking about: how do we show the enemy? What does cancer look like? What does disease look like? We were toying with animations of those enemies.” But then they worried that depicting the disease might distract viewers from the heroes and decided against it. “We thought lets make this about the kids and their alter egos and you know what they are up against.”

The project evolved and the vision started to become clearer but still there was doubt. Most creatives go through these periods and that degree of uncertainty is usually proportionate to the ambition of the project. But then, if you’re doing everything right and talented and smart people come together, there comes a moment when everything starts to make sense.

This moment happened for Zibert when Skin & Bones editor Marka Rankovic was asked to put together a short film to convey going to battle, using material from Zibert’s earlier work for the hospital. “We took all that footage we shot, which was hundreds of hours—and we took these music video clips and movie clips and we made a bit of a mood film.” The juxtaposition of the kids in the hospital with battle imagery just worked, he said. This was also when the Donnie Daydream song “Undeniable” was first tested as a soundtrack for the concept. They played it for Cossette and the client team at Sick Kids and everyone agreed they were onto something. “That was a break-through moment, I think, for everyone. It was a bit of a sigh of relief because I think the potential really started to show through. It was nothing like what we ended up with, but it was an indication we were onto something great.”

“getting the right tone of the moment, and the performances is more important than creating a slick looking spot.”

Zibert’s earlier work with Sick Kids proved beneficial in other ways. “We learned how to shoot in the hospital,” he said. Big crews and elaborate lighting rigs make it more difficult to get the shots you need. “It might look a little more produced but you’re going to miss all the right moments. I think getting the right tone of the moment, and the performances is more important than creating a slick looking spot, in terms of the hospital footage… So when we came back to do this campaign, right away we were like: small crew, two cameras, two lights that can be wheeled around by a person each, and that was it.”

The ad featured actual patients of the hospital, their families and staff; some of whom were asked to recreate some painful moments, like the ER scene where doctors use a defibrillator on a young boy in cardiac arrest. “His mom and dad were in the room watching”, said Zibert, “and we brought in his doctor to perform that scene. We created environments where they would feel kind of comfortable but it was still intense with parents tearing up and half the crew tearing up. But as soon as we’d end, he’d sit up and smile and he was super stoked to be part of that scene. What we learned is that it was actually considered therapeutic for them to be part of the production.” 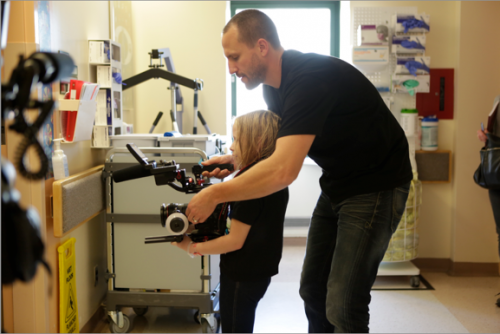 In total they shot at the hospital for four days. There was one day in a field near the Hershey Centre in Mississauga for all the battle scenes and another day inside the Hershey Centre that included the boxing scene, and one more day in studio.

Aside from a little animation, the entire spot was done in camera: the soldiers and knights actually are in the hospital, the motorcycle drove down a hospital hall set at the Hershey Centre, and they had a real tiger in studio (though they didn’t ask the boy to stand in front of it.)

They shot a lot of footage and tried a ton of different ideas, many of which never made the final cut. “Everyone just got behind experimenting a little bit. It was one of those projects that you had to kind of shoot it and play with it in the edit to know if something would work or not. So it took a lot of trust and chance-taking to figure out the tone,” said Zibert.

We asked if there were any shots or scenes that Zibert was particularly proud of? The wide shot of the boxing ring in the arena is at the top of his list. “We got balloons and brought them in but we only had about 50 extras so we duplicated them.”

But most of all he’s proud of the fact that the ad was shot with real people reliving real moments. “The shots I get excited about are the ones that are rooted in authenticity,” he said. “Like the mom shaving her head; she’s done that before and she did it again for the commercial. She does it for her daughter. Bringing the real kids and the real staff and getting authentic performances from them, I’d say that is the thing I get most excited about.”

Use Exclusion Tags
To Optimize Your Music Search