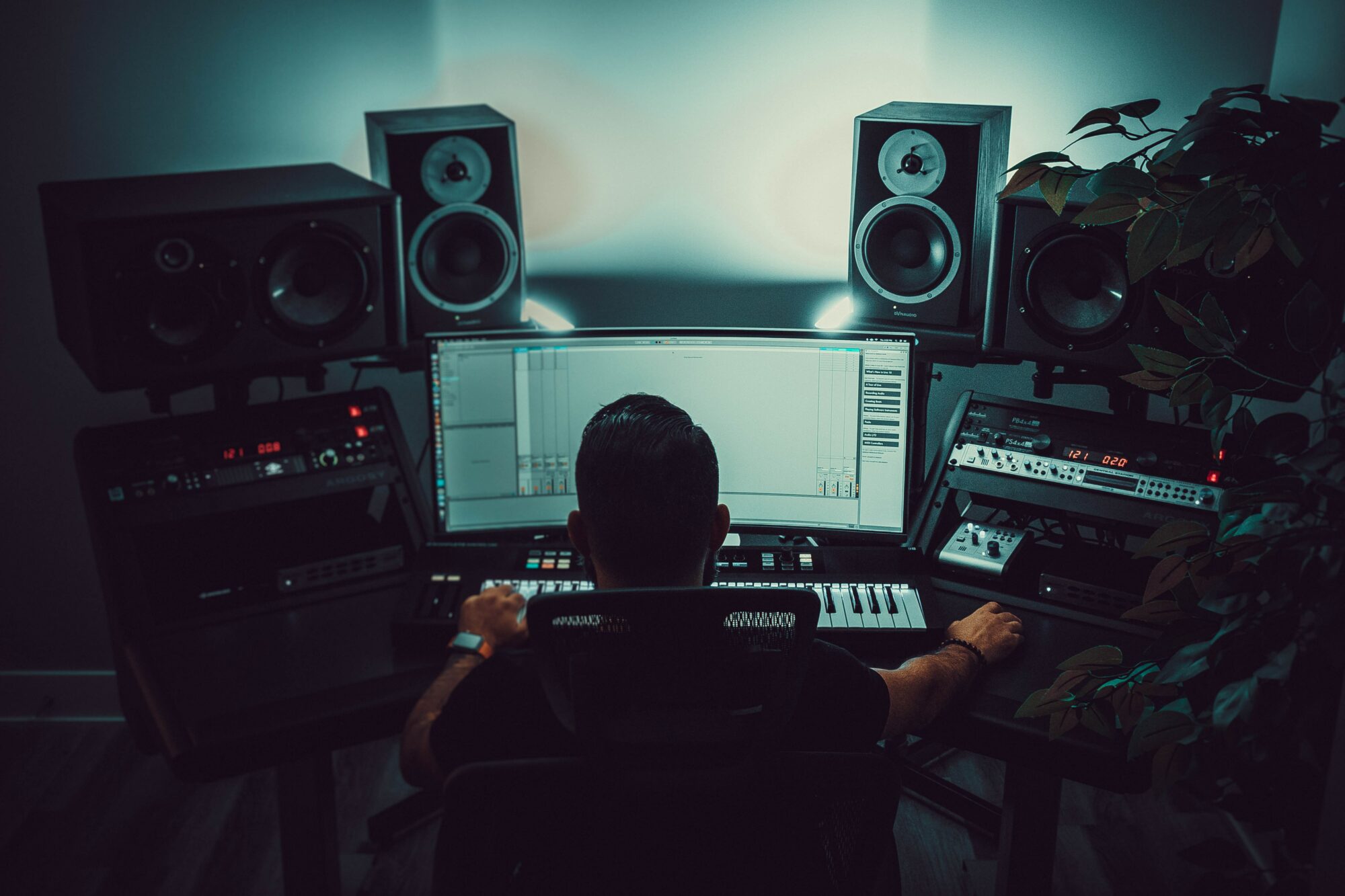 Let’s face it. Music licensing can be pretty tedious from time to time. Okay… most of the time. But you don’t need to understand every term or nuance to purchase a music license. If you’re an advertiser looking to license music for your commercial, there are certain key terms that will make your life easier if you understand them clearly. And frankly, they aren’t so difficult to grasp. We’ve compiled the most important ones below.

But before we get into that, let’s set the mood with some background info on the types of licenses that contain these terms.

A sync license is for music that is literally synced to visuals in a cohesive piece such as a movie, video game, TV show, or ad. It grants you the right to put music over your video or any media content. Whether you’re licensing a Rolling Stones hit or a quirky alternative piece by an unknown indie band, make sure you’re dealing with a sync license. In general, these licenses are covered by one-off fees (a single fee). You pay an amount, upfront, to the rights holders (e.g. music label, publisher or artist) in order to use the song in your video production.

When an artist records a track, that particular recording is called a master. A master license gives you the right to use that specific recorded version in your production. There can be many recordings of the same song. For example, there are hundreds of separate masters of The Rolling Stones’ “Sympathy For The Devil”. These include their live recordings when playing in arenas or simply, studio recordings.

Generally, a record label will chip in to cover the cost of the production of a recording. In exchange, the label will hold a portion or all of the master rights. Independent artists usually don’t share their master rights since they often produce their tracks without any support from another party.

If you would like to use any track (even a short sample from it), for any medium, you need to get a master license. Remember, “Sympathy For The Devil Live in St. Louis” is not the same master as “Sympathy For The Devil Official Audio”. If you’re going to use parts from both recordings, make sure you get the master rights for each.

A publishing license signed by a song’s writer(s) grants you the right to use their song’s lyrics, melody, and composition in your production. Every writer who contributed to the track gets a portion of the publishing rights. It is important to highlight that these rights have nothing to do with a master of a song. The composition, lyrics and melody (publishing rights) are a separate entity from the actual recording of the song (master rights), thus are handled independently.

Say you need to make a hip-hop version of The Rolling Stones’ “Sympathy For The Devil” for your next commercial. For that, you have to create a cover version of the song, which means re-recording it with a different arrangement to create a separate master. If so, you would need to obtain the publishing rights from the writers to create this new version.

All of these licenses serve different purposes, and you will need to get all three of them to use a recorded piece of music in your commercial. This is because you would need the rights to the two entities (composition/lyrics/ melody and master) as well as the right to use the track in an audio-visual project. Accordingly, if you only have a master license without the publishing and sync rights, you can’t use that track in your ad.

However, if you’re working with a music licensing company, you don’t have to worry about finding the rights owners and negotiating with each party one by one. You can assume that the licensing firm already handled all three of these licenses before you purchase music from their platforms. But still, make sure that your agreement with the license provider covers all three rights above.

You can read more about music licensing here.

This is the most fundamental right in a sync license: the right to put music on an audio-visual medium. Some licenses specifically describe your right to also edit the audio files of the licensed track to fit the picture. Even if that’s not explicitly stated, it’s expected that you will do some alterations on what you licensed. These generally include the adjustments you can do on the main audio file, such as cutting out a part of the song (e.g. the bridge) and looping another part (e.g. chorus, verse) a few more times. All sync licenses grant the right to reproduce, but the terms for altering the track might change depending on the licensor.

For example, adding a melody, a musical jingle, or any vocals to your licensed track might not be covered by the right to reproduce. If that is your intention, just speak to your provider, and most can negotiate a simple addendum that grants you what you need. There could be fees or additional clearance to get for that, especially for artist tracks (as opposed to library tracks).

You can often find this keyword under the Right to Reproduce. Some music libraries expect you to play around with split tracks (or stems) enough that it substantially changes the music. This will be stated as the “right to alter”.

Stems are individual audio files for each instrument, vocal, and musical element of a song. If you have access to stems and have the right to alter the song, you can make significant adjustments to the music for it to fit well with your video.

Are vocals overlapping with the voiceover? Mute the vocals for that section. Want to hear more rhythm? Raise the volume of the drums. The choir section makes your commercial look too holy? Cut it out!

If you need to make alterations beyond just cutting and pasting the song’s main audio file, make sure your license gives you access to the stems.

Media (or sometimes “scope of use”)

Scope of use refers to which media a piece of music will be used. It could be anything from broadcast television to internet streaming, or a combination of a few. More often than not, you will see a shortlist of all media covered by the license. The type and number of media in the agreement will have an effect on the price. For example, a track that costs $2,000 for broadcast TV, might cost only $500 for a paid social campaign. Also, it goes without saying that the wider the scope of use, the more you will have to pay.

This defines where the content will be broadcasted. It can be a country, just a state or province, or sometimes larger regions such as North America, or language-related country clusters such as DACH (Deutschland), Austria (Austria), and Switzerland (Confoederatio Helvetica). Since content on the internet is often broadcast globally (and not geo-gated), sometimes the production company’s location will be used as a proxy for pricing according to geography.

Exclusivity refers to whether or not the licensee is the only one allowed to use the track for a certain license period or in a certain part of the world. Sometimes, licensing contracts will grant exclusivity solely in a particular product category, such as “automotive” or “personal care”. This means that other brands in the same industry won’t be able to use the licensed track in their commercials.

For example, say Volvo predicts that the music for their upcoming commercial will contribute to competitive advantage and wish that no other competitor licenses it. An exclusivity clause stating these boundaries will not allow their competitors to use the track, but they will have to pay more to cover the potential revenue that the music could have generated from other clients.

How long a song can be used, starting from the commercial’s original air date. If you wish to continue with the broadcasting after the time limit (e.g. one year), there is generally the option to renew the license.

“In Perpetuity” refers to the term of your license. It means that you can use the track in your ad campaign forever (or until the end of the product’s life). Generally, big brands would ask for a term in perpetuity if they really think that the music will have an important role in their long-term branding strategy. Keep in mind that this offer can increase the licensing cost from four figures to six figures pretty quickly.

Nowadays, with the number of advertising possibilities on social media, one legitimate question we always get asked by our clients is: Can I keep my video online once my ad campaign is over? If your license covers archival rights, yes you can!

Archival rights allow licensees to have various copies of the audio-visual content on their digital platforms in perpetuity, as long as this content is not promoted. This solves a big issue for advertisers who (justifiably) see a liability with having their content hosted on platforms that are sometimes hard or impossible to control, such as social media or anywhere else on the internet.

On Bopper, we offer free archival rights attached to every digital/web/social license. We define these rights as “storage on social media platforms that is not sponsored or otherwise subject to paid internet traffic”. You can read more about our archival rights here.

When you pay for a track without owing any royalty payments, this is a Royalty Free license. Royalties are recurring payments to right holders that compensate them in exchange for licensing their music. For Royalty Free licenses, however, a single fee is sufficient to license a track. In some cases, this has a more narrow definition, whereby it is only free from royalty payments in specific mediums.

Performance Rights Organizations (PROs) are various societies around the world that collect performance royalties on behalf of rights holders. Some examples of these are SOCAN in Canada, and ASCAP and BMI in the US. In some instances, the songwriters are entitled to additional performance fees or royalties. The royalties are based on the number of times a song is used or the number of people who potentially hear it. These are collected from broadcasters by the PROs, and then paid directly to songwriters and performers. Your license may mention PROs to state clearly that the license fee does not contain any of the royalties that are managed by these organizations.

The actual cost of a license – what you must pay to purchase the rights to use the song. If you read your license carefully, you’ll notice that it is only really valid when the payment is received, and not when it’s signed or on the air date stated. This is usually not a problem, but we’d suggest keeping an eye on your payment to make sure you are fully authorized to use the coveted track.

Still have questions? If we didn’t cover a term you’re specifically curious about, reach out to us in the chatbox below or at everything@boppermusic.com. We’d be happy to answer any questions, provide definitions, and point you in the right direction for any music licensing needs you may have.

How Do Indie Musicians Make Money In This Digital Era