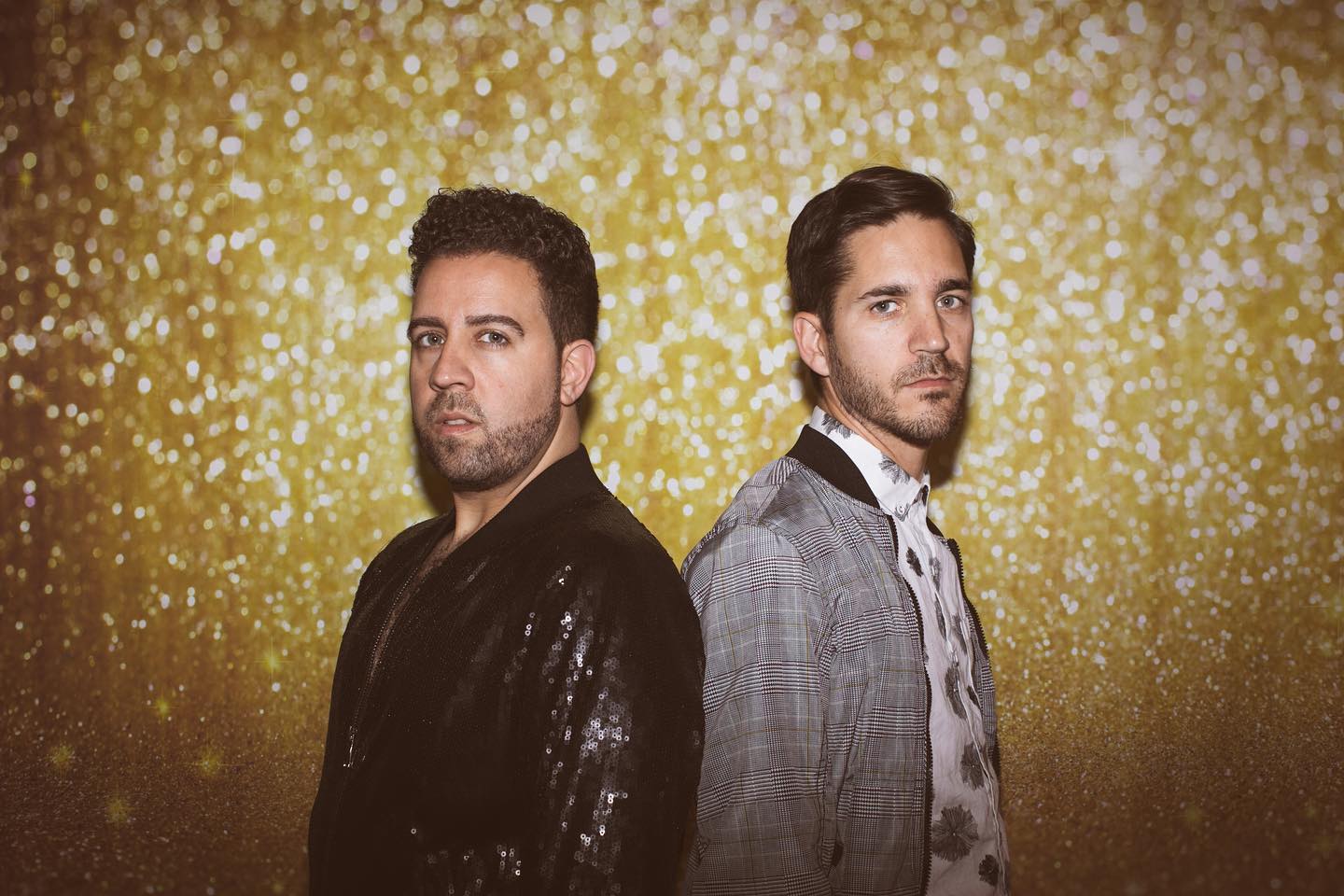 We’re thrilled to add the Los Angeles-based pop duo Wolf and Love to our roster of talented independent artists. The duo is made up of Denny Love, the dynamic, powerhouse singer-songwriter, and Danny Wolf, the mad scientist producer and multi-instrumentalist.

Danny’s dance invoking, rhythmic instrumentations, mixed with Denny’s sultry, catchy melodies and tongue-in-cheek delivery, are a perfect team. The duo has managed to write some super fun, groovy bangers with sticky hooks that won’t get out of your head for days.

Their latest single, “Flexibility”, celebrates the “fluidity and freedom of love”. The cheeky song is a nostalgic homage to 80s vibes, but with a modernized sound and arrangement that takes it to a whole new level. Check out the video clip for the single and make sure to watch until the end for Carey Clayton’s glimmery guitar solo.

Throughout their music and videos, we can see how being part of the LGBTQ+ community has influenced their art…So we asked them some questions about their opinions on PRIDE and how this community influences their work.

What does PRIDE mean to you, overall?

“Pride,” to Wolf and Love, “means the ability to be unabashedly yourself. Pride is being able to get on a stage and express exactly who you are without any fear of judgement or feelings of insecurity. Pride makes us feel like we can do ANYTHING in this world. Because of Pride – we can celebrate everyone’s individuality. It’s the celebration of all of us being ONE. We believe Pride should be a way of life.”

How does being part of the LGBTQ+ community influence your music and songwriting?

“Being a part of the LGBTQ+ community is a huge part of our music. A lot of our songs, sonically, are colorful and fun and are really representative of the unity of sounds in pop music, which is why we use a plethora of different instruments. In the songwriting, it’s very important to us to showcase the universality of our lyrics.

We don’t shy away from the use of pronouns, which Denny (who is openly gay) will attest to having left them out of his lyrics, early on in his career, when it was a bit less accepting of a time to talk about same-sex relationships in songs. In our song, Flexibility, we wanted to celebrate the fluidity and freedom of love. Times have truly changed, and we want to make sure we express ourselves so that others are inspired to live and celebrate their authentic lives.

We want folks who hear Wolf and Love’s music to feel like they are celebrating and enjoying the trials and tribulations of love and life. Our goal is to have fun, first and foremost, and to try and be prolific enough to inspire people of all walks of life.”

Bio: Denny and Danny’s friendship began with a meeting back in 2009 when they were both living in New York City. A mutual friend suggested Danny sub on drums for Denny’s solo project. After a short tour they parted ways to pursue their own musical paths. Danny went on to tour the world with several successful bands while Denny continued his solo career and honed his craft as a songwriter. 9 years later they ran into each other at a party and decided to write a song together. They quickly realized there was a chemistry with Danny’s dance-y rhythmic tracks pairing perfectly with Denny’s unique sultry voice and catchy melodies. They both decided to make the move across the country to Los Angeles to further their career. After completing a couple more songs they released their debut EP called “Something to Work With.” While also continuing to write music, they developed a cult following on Youtube with their unique music videos which have garnered hundreds of thousands of views.

Models with Down Syndrome Are Killing It in the Fashion Industry