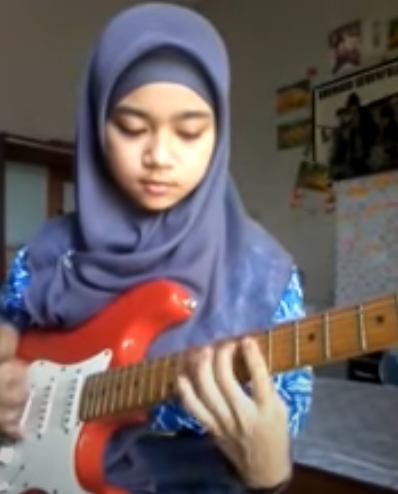 Here are your new favorite musicians, sure to rile up your most conservative family members: three bad-ass Muslim women are gaining popularity playing heavy metal and punk music.

Sena Hussain, Meliani Siti, and Gisele Marie are three separate music acts individually making a mark on both the perception of Muslim women and the way audiences think about rock music, a genre typically dominated by white men.

“Islam is my religion and music is my job” – Gisele Marie

Sena Hussain is the first woman to ever sing at the Islamic Society of North America in Chicago back in 2007, a year before Barack Obama would be sworn in as President. The performance she gave with her band, Secret Trial Five, was not exactly celebrated. A fair number of audience members walked out of her show, although others stayed and appreciated the uniqueness of what they were seeing: a young Arab singer rocking out in the tradition of punk rock. And what’s more punk than freaking out old squares?

A few years later, Hussain was featured in the documentary Taqwacore: The Birth of Punk Islam, which was filmed in both the United States and Pakistan (currently available on Amazon Video).

Down in South America, Gisele Marie, a 42-year-old Brazilian woman who converted to Islam 8 years ago, sees how the simple act of playing guitar in rock and heavy metal bands while wearing a niqab, the traditional cloth that covers Muslim women’s faces, affects people’s assumptions.

“My Muslim friends and I are trying to combat this stereotype. I’m a great believer of individuality and wearing the niqab as a personal choice”, Marie told The Tribune. “I’d never impose it on anyone else. One should be free to wear what they want to.”

Marie has played guitar in several bands, including one with her brother called Spectrus, which she recently left in August 2015 to pursue other projects.

Marie says she sees Islam as her religion and music as her job; two separate entities without contradiction. If it’s upsetting to observers, that’s their problem.

In Indonesia, a young Muslim girl didn’t realize she was doing anything notable when she first uploaded a video on YouTube where she covered the metal song Hourglass by Lamb of God. But when Meliani Siti saw the video had reached over 1.5 million views, she knew she’d found her calling.

Since going viral in 2014, she has uploaded several more guitar-centric covers of mostly metal songs on her YouTube channel. Along with her friend Gizaldi Adipramastaya, they’ve collectively attained nearly 4 million views between their channel and Meliani’s personal channel. Clearly there’s an audience for this type of performance.

As Donald Trump’s ignorant angry rhetoric continues to fuel fear and anxiety towards Muslims, it’s refreshing to see young Muslim women kicking ass with guitars and rock music. The next step would be for these ladies to cross over into the mainstream and attract larger audiences, something we’re optimistic about witnessing.

What Is Music Licensing?